As part of the Listening to the Dead podcast series with best-selling author Lynda La Plante and CSI Cass Sutherland, Forensic Access’ Pathologist Dr. Brett Lockyer discusses the telltale signs between strangulation and hanging during a post-mortem, and where best to look for evidence when a suicide is not what it seems.

How prevalent are cases of strangulation in your work today?

“The most common form of homicide we receive is stabbing, which is extremely prevalent in cases involving female victims. Aside from stabbing, the second most common form of homicide involving female victims is strangulation or neck compression. Personally, I would deal with around four or five cases of neck compression per year. So we don’t get them that often, but they do occur.

Are there instances where it’s difficult for you to tell whether the cause of death is strangulation?

“With strangulation, it can be quite difficult to establish cause of death, especially if there have been other forms of injury caused. For example, let’s take someone who’s been assaulted, but there’s also an element of strangulation in the case. It’s very difficult to know where the strangulation fits in.

There are signs we look out for, such as markings around the neck, fractures to the voice box or fractures to the bone at the top of the neck, called the hyoid bone. There are also petechial haemorrhages to look out for, otherwise called pinpoint haemorrhages. They can indicate that there has been pressure applied to the neck, however they don’t indicate that the haemorrhage itself is the cause of death since they can occur in other scenarios not related to neck compression.

It’s also important to look at the scene, look at what other findings you have and run some tests and analysis. After that you are then in a position to consider whether or not strangulation has taken place. It can be quite straightforward if there’s no other cause of death or form of assault present. But when someone has been subjected to various forms of assault, that’s where it becomes more difficult.

What sort of evidence are you looking for during the post-mortem that can tell you whether it’s a case of strangulation with hands, ligature or hanging?

“The neck is the most significant part of the body to be examined. What we look for in a case of neck compression would be any markings on the neck, bruises mostly. If someone’s been strangled with someone else’s hands, i.e. if someone had their hands around the neck, then we look for what’s called discoid bruises, which are bruises caused by fingertips. If someone has been strangled through a neck hold, where the victim has had their neck placed in the fold of someone’s arm, you don’t always see anything externally.

In ligature strangulation and in hanging, the most significant finding is the mark left by ligature itself. We’d see that either as a straight line across the neck in a ligature strangulation, or in a hanging case as a mark which then rises to a point because of the suspension. There are also other things to look out for as well, such as scratch marks or any damage to the fingernails of the victims.

In a ligature strangulation you may see scratch marks around the ligature, where the victim has tried to remove the ligature from the neck, and their fingernails could have been damaged as a consequence of frantically trying to remove it.

What about internal markings? Is there anything you can look out for there?

Internally, we have to start with a bloodless field. The first thing we’d do is drain the neck of any blood. We do this internal inspection of the neck as the last stage of the post-mortem examination, once all of the organs of the chest and the brain have been removed. Once you reflect the skin, you’re looking for bruises within the deep muscles of the neck.

“If you do find lots of deep bruises, which raises suspicion about neck compression especially in cases where there are no external markings, the next stage is to examine the larynx, which forms part of the Adam’s Apple. Above that, there’s a bone called the hyoid bone, which is quite high in the neck. We look to see if there’s any injuries to those structures. If there are, that would further support that there has been a crushing mechanism to the neck. As we say in forensic pathology, the findings would support that fatal compression to the neck has been applied.

How important is it to see the weapon that has been used in the assault?

“Incredibly important, however I don’t like to go in knowing what type of weapon has been used. I like to come up with that suggestion at the end of the post-mortem, rather than being led through the post-mortem with the instrument in mind and making the injuries fit the weapon. I actually insist that I’m not informed of what weapons may have been used in a case until after the post-mortem examination.

The same thing is true of ligatures, since ligatures can also have patterns to them. Especially in hanging cases, it’s very important for the pathologist to see the ligature, because you’re not trying to establish the cause of death which is sometimes quite obvious; the cause of death is undisputedly hanging. What you’re trying to do is ensure that it is a hanging case, and it’s not a strangulation that’s been disguised as a hanging.

What can the ligature itself tell you?

“It is really important for the Forensic Pathologist to examine the ligature and see not only how the ligature has been wrapped around the neck, but also the type of knot which may have been used.

In hangings, the deceased will have often used a simple knot or a slipknot. But slipknots are quite complex, and in the case of a ligature strangulation it’s unlikely that the perpetrator will have had time to form a slipknot. So the majority of the time, in hanging cases, simple knots are often used. The knot itself is very important because often it will contain DNA from the person who has tied the knot.

What we will do is be sure not to disturb the knot. We will try to cut the ligature away from the knot itself. This preserves both the knot which has been formed and preserves any DNA which has been caught up in that knot, such as skin cells and hair fibres.

What about people who survive or are in hospital? Do you get called to many of these cases?

“Despite what you see on television, we’re also involved in living cases as well. If I don’t see strangulation often in my practice, then you can guarantee that a hospital doctor sees it even less. You need an expert really to go in and assess those cases. For example, you wouldn’t go and see a gastroenterologist if you had a problem with your toe. The best thing to do is go to the expert who deals with those things on a regular basis.

I do work with both the living and the deceased, which contradicts the common conceptions about what a Forensic Pathologist does”.

Forensic Access works with some of the UK’s most experienced Home Office-registered Pathologists as well as offering the complete range of experts for the more specialist cases. Our services include:

Listen to the podcast here: https://podcasts.apple.com/gb/podcast/listening-to-the-dead-forensics-uncovered/id1497562299

The Rise of the Second Post Mortem Desktop Review

We regularly assist Solicitors with a variety of Forensic Pathology services including neuropathology, paediatric pathology, post mortems (PM) and second… 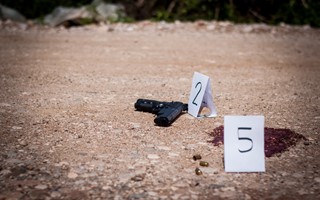 The use of unaccredited and poorly regulated police “experts” in firearms investigation continues. This issue is underlined in the Forensic…